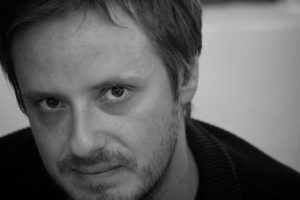 Ivan Šamija was born in 1976 in Zagreb, Croatia. He has published two books of poetry: Kupolenebo (AGM, Zagreb, 2003.) and Projekt Poljska (Meandarmedia, Zagreb, 2014.), which was awarded by the Croatian Ministry of Culture as one of the best Croatian fiction books published that year. His poetry was translated into English, Italian, Ukrainian, Bulgarian, Slovene, Catalan and Rumanian and featured in a bilingual anthology of contemporary Croatian poetry (Croatian/Ukrainian) Kada se slova presele na tvoje lice (Lviv, 2008.) and also an anthology of contemporary Croatian poetry published in Rumanian Ritualul omului fericit – 18 poeţi croaţi tineri (Tracus Arte: Bukurešt, 2016.). He is a member of the Croatian Writers Society and one of the founders of BRUTAL, an association for the promotion of culture and art. He takes part in organizing the International Festival of Contemporary Poetry in Zagreb since 2006. He was selected to participate in Versopolis project, a Europe-wide platform for promotion of emergent poets. As part of Versopolis project his poems were translated into Slovene and English and published in a book Prerazporejanje hrepenjenja (Beletrina, Ljubljana, 2015.). Currently he works as a molecular biologist in Zagreb.